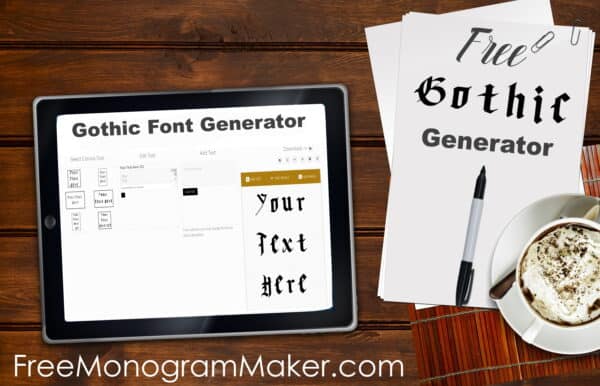 We offer a free gothic font generator that you can use online to write any text without downloading any software to your PC or installing any fonts. Our free Gothic fonts come in a variety of styles and include Gothic letters and numbers.

You can write anything you want with our free Gothic font maker. You can change the font, the font size, and the color. You can download your text as an image or a PDF file.

How to Use the Gothic Font Generator

It is easiest to use the font generator on a computer (PC or Mac). You can use it on a mobile phone (Android or iPhone) but it isn’t as easy to work with.

You cannot directly copy and paste calligraphy if you don’t have the font installed on your computer. Even then, you will only be able to paste on that same computer. However, you can copy and paste the image created. To do this, you simply write whatever you want with our free Gothic font creator, and then you download it as a png (it will have a transparent background). You can then copy and paste that image onto any document or file and you will not need to install any fonts.

If you want to upload your creation to social media (such as Facebook or Twitter) then download the image and upload it to wherever you want it to appear or copy the image and paste it.

How to Embellish the First Initial

Gothic text often has a larger first initial than the rest of the letters. To do this, click on the button above to open the Gothic font text generator. Type your first letter and select a really large font. Then, go to “Add text” and type the rest of the text without that first initial. Select a smaller font. Drag the two sections together until you are happy with the placement. When you add text, you need to change it to the Gothic blackletter font.

Old English fonts are often used on tattoos. If you are considering a Gothic font tattoo you will probably want to write your text before, to see how it is going to look. Click on the button below to open the Gothic text generator. Select a canvas size that is similar in size to your tattoo. For example, if you are looking for a tattoo for your arm then select the landscape size. Type the text you would like to appear on your tattoo. Download the tattoo image. If you want to use Gothic tattoo number fonts then see the section below.

Our free font generator includes Gothic numbers as well as letters. These are the numbers that are included:

If you want more options for Gothic calligraphy numbers then see our calligraphy generator.

This is the default Gothic font alphabet that our free font generator uses. There are other Gothic text options available and this is only one example. This sample includes caps and lowercase to show you both options.

Characteristics of the Gothic Letters

There are many styles of Gothic lettering font. Gothic letters are beautiful, precise, formal, and decorative. However, many of the Gothic fonts are illegible if you are not familiar with the font, particularly the uppercase letters (Majuscules). Therefore, if legibility is important, then this might not be the best font for you. If you are set on using this blackletter font and legibility is important then use the lower case letters (Minuscules) as often as possible since they are much easier to read (see the image above).

Most of the Gothic letters have a definite angularity or straightness. This gives it a very precise look. Some people might consider it monotonous and boring but it is a matter of taste. Over the years, rounder variations of the font have developed. These versions add more interest to the uniform straightness that was once more common. The rounder shapes are wider and therefore the letters have a less uniform width than the straighter versions. This causes white space between the letters. To prevent blank spaces, the scribes started to embellish the Gothic letters with lines or extra glyphs. That is the reason you sometimes see letters embellished with additional strokes. The combination of straight, round, and embellished letters forms a very interesting font.

Old English fonts, such as the Gothic typeface are the perfect font to use when you want to portray a vintage look, heavy metal, or classical feel. They can be used for a variety of projects such as vintage book covers, heavy metal posters, classic apparel, etc.

The Origins of the Gothic Font

The Gothic style font has a Germanic origin. It originated in the middle ages in the Gothic or Medieval era when monks and scribes used to create script or church documents with these letters. Most of the letters are very similar to Roman. However, even if you are very familiar with Roman letters some of the Gothic letters might be difficult to read. The Gothic font-style belongs to the sans-serif category of fonts but it has a very Gothic influence.

How to Write Gothic Lettering

The letters were originally written with a plume. To create Gothic calligraphy fonts by hand, you can use a calligraphy pen or a lettering pen. The width of the pen, the angle at which it is held and the style that you choose will determine how your lettering looks. Most lettering looks different every time you practice unless you have a lot of experience. Even once you have more experience, the speed at which you write or draw the letters will influence their form.

The first letter is often emphasized. When you use our Gothic font maker, you can change the font size and make it larger than the rest of the letters. You can also make it bold. If you want to move the placement of the first letter then write the entire word without the initial. Then, go to “add text” and add the initial. Make it is bigger size. You can then drag it to wherever you want to give it a more natural, hand-written look.

The lower case letters are all formed from 7 basic strokes. Three of the seven basic strokes are used in most of the letters and the others are only used in a few letters.

One of the easiest ways to learn how to write the letters is to use our free font generator to create letters on a blank piece of paper and practice each letter until you perfect it.